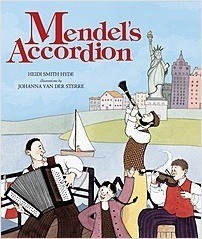 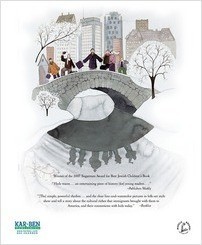 A boy finds his great grandfather’s accordion in the attic and with it the sweet history of klezmer music and the role the old accordion played in Jewish life through the years.

“Mendel had a simple life in a small village, and though he did not have much, he was content. He played the accordion beautifully, and people often asked him to play for them, which he was happy to do. As he travelled from village to village performing, Mendel made friends with other musicians, and soon they formed a klezmorim, a band, of six performers. Together they played at weddings, festivals, and fairs.

Then there came a time when life in the village was no longer happy. People were hungry and afraid of what the future held, and so Mendel decided to move to America. On the boat he met three musicians, and together they played music to ease the misery and discomfort of the long journey.

When they got to New York, Mendel and his friends could not believe how big and how populated the city was. Though Mendel worked long hours mending shoes, he still found time to play his accordion. After he got married he played for his young wife, and then later he played for his children. His old friends who came over on the ship with him would visit his home, and they would play together ‘just like the old days.’

This heart-warming tale tells the story of klezmer musicians, who came together to play music on special occasions. Though they lived in troubled times, these musicians never let go of their music, taking it with them wherever they went, holding on to their musical heritage even when they were building new lives in countries that were far away from their homelands. At the back of the book the author provides the reader with more information about klezmer music and the accordion.” —Through the Looking Glass Children’s Book Review

“…[the] simple, powerful rhythm…and the clear line-and-watercolor pictures in folk-art style show and tell a story about the cultural riches that immigrants brought with them to America, and their connections with kids today.”

“This book is upbeat and delightful, demonstrating that amidst hardships, music can keep people alive and energetic.”

“With a steady rhythm and a tone that fittingly hits joyous and sad notes, Hyde traces…an entertaining piece of history [for] young readers…”

Heidi Smith Hyde is the director of education of Temple Sinai in Brookline, Massachusetts. Her books include Feivel's Flying Horses, a National Jewish Book Award Finalist, and Mendel's Accordion, winner of the Sugarman Award.

Johanna van der Sterre studied illustration at the Savannah College of Art and Design From her cozy little home in upstate New York, she crafts her painting with ink line and watercolors. Johanna lives with her husband, Joseph, and two very bouncy dogs, Ernie and Rudy. She is the award-winning illustrator of Mendel's Accordion.