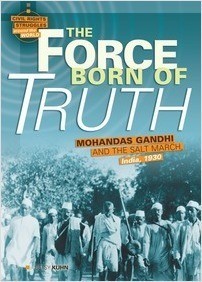 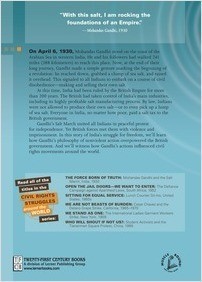 The Force Born of Truth

Gandhi’s Salt March united all Indians in peaceful protest for independence. Yet British forces met them with violence and imprisonment. In this story of India’s struggle for freedom, we’ll learn how Gandhi’s philosophy of nonviolent action overpowered the British government. And we’ll witness how Gandhi’s actions influenced civil rights movements around the world.

“With this salt, I am rocking the foundations of an Empire.”―Mohandas Gandhi, 1930

On April 6, 1930, Mohandas Gandhi stood on the coast of the Arabian Sea in western India. He and his followers had walked 241 miles (388 kilometers) to reach this place. Now, at the end of their long journey, Gandhi made a simple gesture marking the beginning of a revolution: he reached down, grabbed a clump of sea salt, and raised it overhead. This signaled to all Indians to embark on a course of civil disobedience―making and selling their own salt.

At this time, India had been ruled by the British Empire for more than 200 years. The British had taken control of India’s main industries, including its highly profitable salt manufacturing process. By law, Indians were not allowed to produce their own salt―or to even pick up a lump of sea salt. Everyone in India, no matter how poor, paid a salt tax to the British government.

Betsy Kuhn has written many books for young adult readers, including Prying Eyes: Privacy in the Twenty-First Century, and The Force Born of Truth: Mohandas Gandhi and the Salt March. She lives in Maryland with her family.