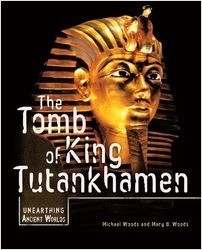 The Tomb of King Tutankhamen

A royal treasure buried for 3,000 years … On November 4, 1922, a British archaeologist named Howard Carter unearthed a buried staircase in Egypt’s Valley of the Kings. At the bottom of the staircase was a door bearing the name Tutankhamen. That door led Carter to rooms filled with gold treasures and ancient statues. And deep in the tomb lay the mummy of a king, covered in jewels and sealed in a golden coffin. Carter’s discovery was the first time someone had found the undisturbed burial chamber of an Egyptian ruler. That King Tutankhamen—who began his reign about 1334 B.C.—had died very young of unknown causes made the discovery even more intriguing. Soon Tut’s tomb became famous around the world. People marveled at the gold treasures, the beautiful wall paintings, and the mysterious mummy. They grew fascinated by Egyptian history and culture. By unearthing this treasure from an ancient world, Carter helped people understand what a great civilization ancient Egypt had been.