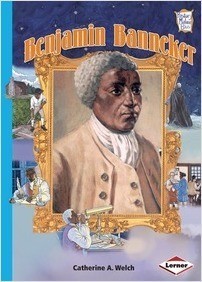 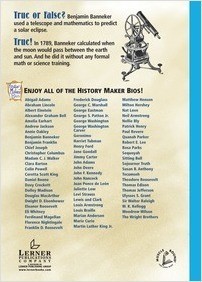 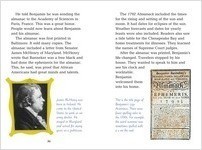 From the Series History Maker Biographies

True or False? Benjamin Banneker used a telescope and mathematics to predict a solar eclipse. True! In 1789, Banneker calculated when the moon would pass between the earth and sun. And he did it without any formal math or science training. As a young boy, he worked on the farm owned by his father, who was a freed slave in Maryland. He helped to survey and plot out the site for the U.S. capital city, Washington, D.C. He also published several almanacs that helped farmers, merchants, and sailors predict the weather and know the dates of holidays and festivals.

Explore the lives of famous figures found in the core of every history curriculum. Each completely nonfiction book is illustrated with historical photographs and illustrations. Sidebars, a timeline, and entertaining cartoon illustrations further illuminate each subject’s personality. View available downloads →