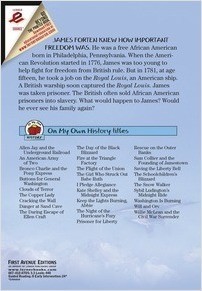 James Forten knew how important freedom was. He was a free African American born in Philadelphia, Pennsylvania. When the American Revolution started in 1776, James was too young to help fight for freedom from British rule. But in 1781, at age fifteen, he took a job on the Royal Louis, an American ship. A British warship soon captured the Royal Louis. James was taken prisoner. The British often sold African American prisoners into slavery. What would happen to James? Would he ever see his family again?

“The realistic illustrations give life to Forten’s tale.”
—The Horn Book Guide

“Although there may be fictionalization, a bibliography with primary sources suggests the depth of the author’s research. Orback’s paintings add to the narrative’s dramatic moments and provide period details. . .”
—School Library Journal