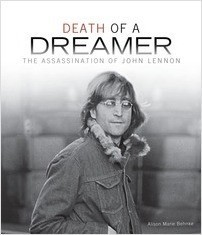 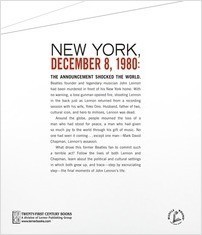 Death of a Dreamer

The Assassination of John Lennon

New York, December 8, 1980: The announcement shocked the world. Beatles founder and legendary musician John Lennon had been murdered in front of his New York home. With no warning, a lone gunman opened fire, shooting Lennon in the back just as Lennon returned from a recording session with his wife, Yoko Ono. Husband, father of two, cultural icon, and hero to millions, Lennon was dead.

Around the globe, people mourned the loss of a man who had stood for peace, a man who had given so much joy to the world through his gift of music. No one had seen it coming…except one man—Mark David Chapman, Lennon’s assassin.

What drove this former Beatles fan to commit such a terrible act? Follow the lives of both Lennon and Chapman, learn about the political and cultural settings in which both grew up, and trace—step by excruciating step—the final moments of John Lennon’s life.

“Beginning with the announcement of Lennon’s death on December 8, 1980, the author then adeptly presents two chronological biographies of Lennon and Mark David Chapman and comes full circle with a more detailed telling of the events leading up to the assassination. Black-and-white photographs, sidebars, and first-hand accounts enhance and extend a well-researched, engaging narrative.” —The Horn Book Guide

“Although 32 years have passed since Lennon’s assassination, his life remains a fascination for many. Tracing the lives of Lennon and Chapman simultaneously provides an insightful lens.” —Library Media Connection

“This well-documented title should find a home in libraries with deep music and biography collections.” —School Library Journal

“This study offers not only a detailed account of the events surrounding Lennon’s murder but also a lucid—if, as it must be, puzzling and inconclusive—picture of his killer’s life and conflicting, enigmatic motives… Equally useful for its particular focus and as an updated alternative to the plethora of older assignment titles.”—Booklist

“An excellent introduction to an era of history through the lens of John Lennon.” —VOYA