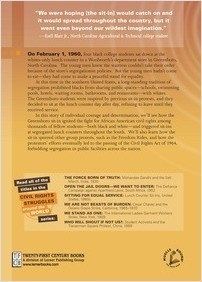 “We were hoping [the sit-in] would catch on and it would spread throughout the country, but it went even beyond our wildest imagination.”―Ezell Blair Jr., North Carolina Agricultural & Technical college student

On February 1, 1960, four black college students sat down at the whites-only lunch counter in a Woolworth’s department store in Greensboro, North Carolina. The young men knew the waitress couldn’t take their order because of the store’s segregationist policies. But the young men hadn’t come to eat―they had come to make a peaceful stand for equality.

At this time in the southern United States, a long-standing tradition of segregation prohibited blacks from sharing public spaces―schools, swimming pools, hotels, waiting rooms, bathrooms, and restaurants―with whites. The Greensboro students were inspired by previous sit-in protests, and they decided to sit at the lunch counter day after day, refusing to leave until they received service.

In this story of individual courage and determination, we’ll see how the Greensboro sit-in ignited the fight for African American civil rights among thousands of fellow students―both black and white―and triggered sit-ins at segregated lunch counters throughout the South. We’ll also learn how the sit-in spurred other group protests, such as the Freedom Rides, and how the protestors’ efforts eventually led to the passing of the Civil Rights Act of 1964, forbidding segregation in public facilities across the nation.