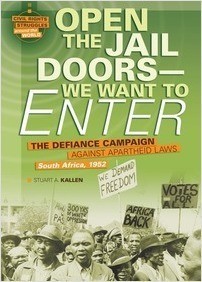 Open the Jail Doors — We Want to Enter

“The Defiance Campaign marked a new chapter in the struggle…going to prison became a badge of honor among Africans.”―Nelson Mandela, 1952

On June 26, 1952, twenty-five men and five women entered the waiting room of a railway station in Port Elizabeth, South Africa. If they had been white people of European descent, they would have gone unnoticed. But they were black South Africans who were violating the waiting room’s “Europeans Only” sign as part of the Campaign of Defiance against Unjust Laws. Instituted by the African National Congress (ANC), the campaign aimed to peacefully defy a series of laws known as apartheid―a system of legal racial segregation.

Across the country, similar protests took place and more than 250 resisters went to jail that day. The ANC’s strategy was to fill the jails to overflowing and cause the police and judicial branches of government to break down. In July fifteen hundred men and women took part in the campaign; in August more than two thousand went to jail.

The Defiance Campaign eventually triumphed, but not before the tragedy of bloodshed, violence, and death among three generations of South Africans. In this riveting story of the long struggle against apartheid, we’ll explore the reasons why thousands were willing to die in the fight for civil rights. And we’ll witness how their courageous efforts led to the day in 1994 when Nelson Mandela stood before thousands of free South Africans as the nation’s first black president.