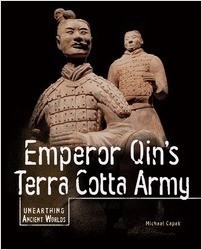 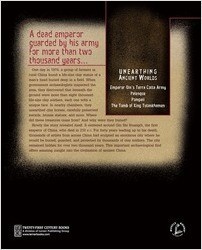 A dead emperor guarded by his army for 2,000 years… One day in 1974, a group of farmers in rural China found a life-size clay statue of a man’s head buried deep in a field. When government archaeologists inspected the area, they discovered that beneath the ground were more than eight thousand life-size clay soldiers, each one with a unique face. In nearby chambers, they unearthed clay horses, carefully preserved swords, bronze statues, and other astonishing things. Where did these treasures come from? And why were they buried? Slowly the story revealed itself. It centered around Qin Shi Huangdi, the first emperor of China, who died in 210 B.C.. For forty years leading up to his death, thousands of artists from across China had sculpted an enormous city where he would be buried, guarded and protected by thousands of clay soldiers. This city remained hidden for over two thousand years. This important archaeological find offers amazing insight into the civilization of ancient China.

Born in rural northern Kentucky, Michael Capek was rescued from youthful shyness and academic failure by communing with nature and reading. Writing gave him a voice and an identity in his teen years and offered a path out of self-doubt and despair. An encounter with author Jesse Stuart in his first year at Cumberland College (Williamsburg, Kentucky) confirmed what he had sensed for years—that his own destiny lay in teaching and writing. Michael married his high school sweetheart, Terri Richardson, in 1969, and they spent a combined 58 years teaching in Kentucky's public schools. Michael retired from the classroom in 1996 to write full time. Today, he roams the same valleys he explored as a child, still finding peace and inspiration in nature, reading, and writing. Sharing those things with children—particularly his grandchildren—continues to be one of his greatest joys.