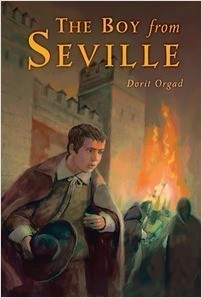 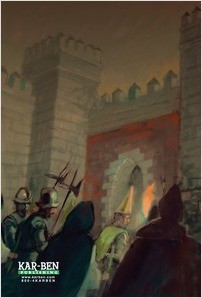 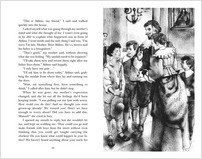 The Boy from Seville

Manuel Nuñez’s life changes forever on the day his parents trust him enough to reveal a secret; they are Jews. Brought up as a Christian during the Spanish Inquisition of the 17th century, Manuel is surprised, but proud when he learns of his family’s true heritage. Manuel’s family must observe their Jewish traditions in secret, for if they are discovered they will be punished – or worse. Manuel’s safety is further threatened when he falls in love with Violante, the sister of a suspected witch. Being with Violante gives Manuel joy, but also brings him and his family even closer to the Inquisitors.

“The Boy From Seville offers not only a good story…but an excellent starting point for a discussion of morality, loyalty, identity, and what freedom means.”

“Originally published more than 20 years ago in Hebrew, this newly translated novel is definitely purposive: Manuel discovers that the girl he loves is also a secret Jew and that his teacher could betray them. The horrific persecution (Manuel’s grandparents were burned at the stake) and the terror of ordinary life under threat by the state and by the mob are ever-present, but so is the courage of those who kept the faith. Readers will be held by the compelling history.”
—Booklist

“This suspenseful novel gives a gritty look at life in Spain during the Inquisition. The action is non-stop and the suspense builds throughout the book as Manuel narrowly escapes discovery time after time.”

“Manuel Nuñez narrates the story of his Portuguese Jewish family passing as Christians in Inquisition-era Spain.”
—The Horn Book Guide

“. . .an effective avenue to increase awareness of the Spanish Inquisitions of 1492 to 1834.”
—Library Media Connection

Manuel, 11, and his family are conversos—Jews who have nominally converted to Christianity—in 17th-century Spain. They have fled harsh discrimination in Portugal, but their lives are still shrouded in fear and suspi-cion. When Manuel’s teacher intercedes, the boy is allowed to join a group who polices the neighborhood looking for Jews, and who previously bullied him. This helps to cement the family’s Christian facade, but endangers them by exposing their home to hostile outsiders. Manuel has a crush on his neighbor Violanti, and he is relieved to learn that she is a converso, too, so now he can share his secret with her. When interfaith love leads to the impris-onment of Violanti’s older sister and the execution of her husband, Manuel’s family flees again, this time to relig-iously liberal Amsterdam. The Inquisition can be a dramatic setting for historical fiction, and Katz’s pen-and-ink illustrations heighten the drama, but this story is dragged down by extensive historical detail that interferes with the narrative flow, and the horrors of the period are presented in stilted dialogue. Character development and a dra-matic plotline do not take shape until well into the book, and conflicts are too neatly and quickly resolved. Alice Hoffman’s Incantation (Little, Brown, 2006) and Kathryn Lasky’s Blood Secret (HarperCollins, 2004) are far more absorbing.

Avi Katz, best known as the illustrator of Jerusalem Report magazine, has illustrated over 100 books. He lives in Israel.