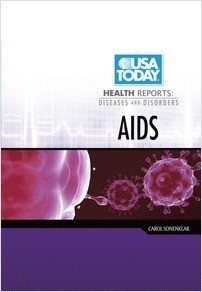 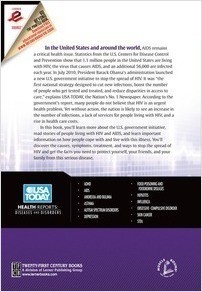 From the Series USA TODAY Health Reports: Diseases and Disorders

In the United States and around the world, AIDS remains a critical health issue. Statistics from the U.S. Centers for Disease Control and Prevention show that 1.1 million people in the United States are living with HIV, the virus that causes AIDS, and an additional 56,000 are infected each year. In July 2010, President Barack Obama’s administration launched a new U.S. government initiative to stop the spread of HIV. It was “the first national strategy designed to cut new infections, boost the number of people who get tested and treated, and reduce disparities in access to care,” explains USA TODAY, the Nation’s No. 1 Newspaper. According to the government’s report, many people do not believe that HIV is an urgent health problem. Yet without action, the nation is likely to see an increase in the number of infections, a lack of services for people living with HIV, and a rise in health care costs.

In this book, you’ll learn more about the U.S. government initiative, read stories of people living with HIV and AIDS, and learn important information on how people cope with and live with this illness. You’ll discover the causes, symptoms, treatment, and ways to stop the spread of HIV and get the facts you need to protect yourself, your friends, and your family from this serious disease.

“Each volume does a solid job in describing a particular health concern and its symptoms, explaining its impact on individuals (personal case studies are included) and society as a whole, and outlining various forms of treatment.” —The Horn Book Guide

“Solid additions for libraries in need of fresh looks at these diseases and disorders.” —School Library Journal

“This very slim (128 short pages, including 10 pages of glossary, index, etc.) book on AIDS is a nicely written overview of the problem from its medical, health, societal, and survival aspects,” —Science Books & Films

“Colorfully illustrated with photos and other images, books in this attractive series provide information useful to student researchers and are supportive of those dealing with medical conditions.” —Booklist

“This is an indispensable resource because we live in a world without borders.” —NSTA

Carol Sonenklar is a published author of children's books. Some of her published credits include Bug Boy/ El Nino Insecto, Virus Hunters, and My Own Worst Enemy. Her first title for Twenty-First Century Books was Anorexia and Bulimia (USA TODAY Health Reports). She lives in Richmond, Virginia.

Developed in partnership with USA TODAY, one of the most read newspapers in the world and the No. 1 newspaper in the United States, this easy-to-read medical series focuses on some of today’s most topical diseases, disorders, and… View available downloads →