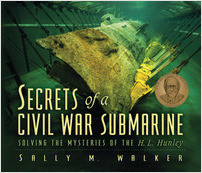 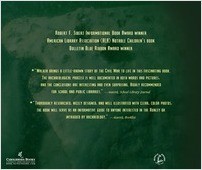 Secrets of a Civil War Submarine

Solving the Mysteries of the H. L. Hunley

On February 17, 1864, the H.L. Hunley made history as the first submarine to sink a ship in battle. Soldiers on the shore waited patiently after seeing the submarine’s return signal. But after several days, the ship had failed to return. What had gone wrong? In 1995, after over 130 years of searching, the H.L. Hunley was finally found buried off the coast of South Carolina. Follow author, Sally M. Walker on a fascinating journey through the workings of the famous submarine, its voyages, and the difficult obstacles that were overcome to recover, excavate and conserve the ship.

“The mysterious disappearance of a Confederate submarine in 1863 becomes even more fascinating when seen through the eyes of the divers, archaeologists, engineers, and other experts who pieced together the details more than a century later. Full-color photographs, helpful diagrams, and engaging writing contribute to this unique and multi-faceted look at how history works.” —School Library Journal

“She [Walker] really hits her stride, though, in explaining the complex techniques and loving care used in raising the craft, recovering its contents, and even reconstructing models of the crwemembers’ bodies. Thoroughly researched, nicely designed, and well illustrated with clear, color photos, the book will serve as an informative guide to anyone interested in the Hunley or intrigued by archaelogy.” —Booklist, Starred review

“The archaeological process is well documented in both words and pictures, and the conclusions are interesting and even surprising. Highly recommended for school and public libraries.” —School Library Journal, Starred review

“Walker skillfully combines history, science, and storytelling in clear and accessible writing that will appeal to middle school students as well as older readers. . . Abundant photographs and illustrations are attractive and informative, and the layout is clean and attention grabbing. . . Walker lets readers know the people behind the facts. . . the Hunley is fascinating and should captivate readers looking to savor a real-life historical mystery.” —VOYA