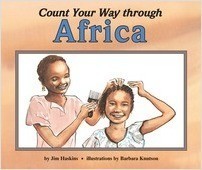 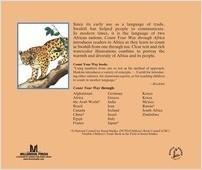 Count Your Way through Africa

From the Series Count Your Way

Since its early use as a language of trade, Swahili has helped people of different African and Arabian cultures to communicate. Today it is the official language of two African nations. In Count Your Way through Africa, Jim Haskins uses the Swahili numbers one through ten to describe such things as seven animals native to Africa and nine lines of an African poem. The clear text and rich watercolor illustrations by Barbara Knutson combine to give young readers a sense of the warmth and diversity of Africa and its people.

Barbara Knutson was the award-winning author and illustrator of many children’s books, including How the Guinea Fowl Got Her Spots and Love and Roast Chicken. A resident of St. Paul and a cherished member of Twin Cities literary community, Ms. Knutson grew up in South Africa and traveled extensively throughout the world. She drew on her firsthand experiences abroad to create the rich, multicultural stories and folktales for which she became so well known. She passed away in 2005.

Count Your Way from one to ten in languages from around the world. Each spread has beautiful, full-page art and a number displayed in both English and a second language, introducing a cultural aspect of the featured country. View available downloads →