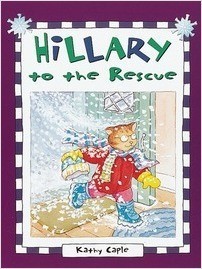 Hillary to the Rescue

Hillary’s drama club has planned a trip to the theater on a cold, snowy day. Always prepared, Hillary bundles up in her warmest clothes and her super-duper warm snow boots. On the long van ride to the theater, though, she notices that everyone else has worn fancy coats, party dresses, and shiny shoes. What’s more, she’s beginning to roast under her many layers of sweaters and scarves. Hillary’s friends wonder why she has worn such bulky clothing, and Hillary wonders if she’s made a big mistake. Then, when the van runs into trouble on the icy roads, who do you think comes to the rescue? In the end, Hillary has a wintry adventure and proves to her drama club, and herself, that it never hurts to be prepared!

“The pen-and-watercolor illustrations are well drawn and laugh-aloud funny.”
—Booklist

“. . .Hillary’s good sense and willingness to help send a positive message, and the cat characters are entertaining.”
—School Library Journal