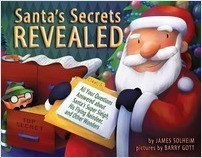 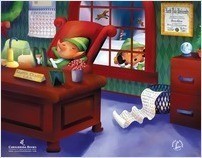 All Your Questions Answered about Santa's Super Sleigh, His Flying Reindeer, and Other Wonders

Warning: Top Secret! You’re probably wondering about this Santa guy. Who is he, and how does he keep track of billions of children around the world? Well, I’ve got the answer. In fact, I’ve got the answer to almost any question about Santa’s secrets you could ask. When Stevie decides that he doesn’t believe in Santa Claus, he’s in for a big surprise! Santa and his elves, eight flying reindeer, and Harry W. Throckmorton the Dancing Cow show Stevie that there’s more to Christmas than he thinks. There’s Gift Fulfillment Centers, a string of satellites called PSSSSSST (Papa Santa’s Super-Secret Satellite Team), and a Spacetime Scruncher. But even more importantly, Stevie discovers that Santa is more than just satellites and science.

“. . . may be enjoyed by children who are old enough to know Santa doesn’t exist but young enough, still, to sit on his lap at Macy’s. The essence of Solheim’s story is reassuring and sunny: Barry Gott’s determinedlybright paintings have a slick, slightly futuristic look in which every edge is as sweet and hard as a candy cane. . . you really might want to purchase one of these books for the slightly jaded but still Santa-loving-8-year-old on your list.”
—New York Times Book Review

“You can’t keep a good legend down – at least when it comes to Santa. A Young skeptic named Stevie joins the ranks of Virginia and others who have questioned Old Saint Nick’s existence. With confidence and a tongue-in-cheek flair, Solheim (It’s Disgusting – and We Ate It!) delivers some answers – mostly scientific, of course – that dispel Stevie’s doubts. Gott’s (the Horace Splattley series) spiffy computer-generated pieces contain oodles of humorous touches.”
—Publishers Weekly

“Kids who have grown out of warm-and-fuzzy Christmas books will enjoy this wise-cracking approach to the holiday. The cartoon artwork is loaded with funny, if not hugely imaginative, details.”
—School Library Journal