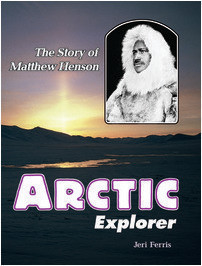 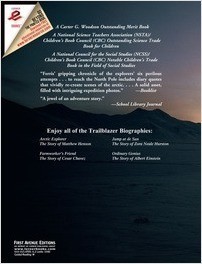 The Story of Matthew Henson

Through howling snowstorms and over treacherous sheets of ice, Matthew Henson and Robert Peary raced against other explorers and death itself to be the first to reach the North Pole. After six expeditions and eighteen years, they finally planted the American flag at the top of the world on April 6, 1909. Because he was a black man, Henson had to start out as Peary’s servant. But with his intelligence, bravery, and resourcefulness, Matthew Henson soon became Peary’s chief assistant.

“Ferris’s gripping chronicle of the explorers’ six perilous attempts over 18 years to reach the North Pole includes diary quotes that vividly re-create scenes of the arctic winter. . . A solid asset, filled with intriguing expedition photos, that can be used for research on explorers and in black studies courses.”
—Booklist

“Ferris sets the record straight with her eloquent descriptions of Henson’s humility, his many remarkable achievements, and his invaluable service to Peary. The book also provides a good selection of black-and-white photographs, helpful maps, and a useful biography.”
—Science Books & Films

“Accurately written and filled with precise details about Arctic survival skills and Inuit customs, the book is a jewel of an adventure story. With black-and-white photographs, a bibliography of primary and secondary sources, and an index, it’s a worthwhile and up-to-date addition to the biography section.”
—School Library Journal