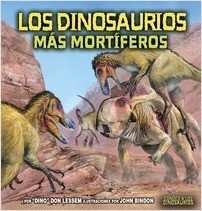 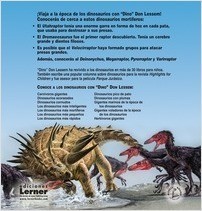 From the Series Conoce a los dinosaurios (Meet the Dinosaurs)

“Dino” Don Lessem brings readers face-to-face with various dinosaur species, detailing their habitats, way of life and how they became extinct. An acclaimed dinosaur expert, Don Lessem has written more than 30 children’s books, writes a popular dinosaur column in Highlights magazine, and was an adviser for the film Jurassic Park. Take a trip through dinosaur time to meet these deadly dinosaurs face-to-face: The Variraptor had pointy teeth with grooves like steak knives to saw through meat! The Draeomaeosaurus was the first raptor ever discovered. It had a very large brain! The Microraptor was no larger than a crow and is the closet known relative to birds! Plus, you’ll get to know Utahraptor, Deinonychus, Megaraptor, Pytoraptor, and Velociraptor.

“The Spanish translation is accurate and accessible; and the appealing illustrations complement the texts well, introducing the facts in an accessible, fun way. . . Recommended for all libraries.”
—Críticas