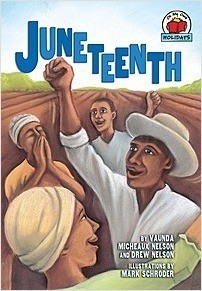 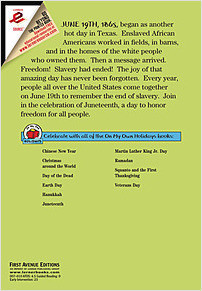 From the Series On My Own Holidays

June 19th, 1865, began as another hot day in Texas. Enslaved African Americans worked in fields, in barns, and in the homes of the white people who owned them. Then a message arrived. Freedom! Slavery had ended! The Civil War had actually ended in April. It took two months for word to reach Texas. Still the joy of that amazing day has never been forgotten. Every year, people all over the United States come together on June 19th to celebrate the end of slavery. Join in the celebration of Juneteenth, a day to remember and honor freedom for all people.

“This entry in the On My Own Holidays series offers a solid introduction to the holiday for independent readers. . . leaping, embracing figures convey the resilience and rejoicing of celebrants then and now.”
—Booklist

“The description of slavery is brave in its honesty, difficult to read but necessary to understand. . . Realistic paintings in vibrant colors illustrate these easy readers.”
—School Library Journal

“Schroder’s plentiful illustrations have a static, dioramic look, but their rich colors will show to better effect in group use than many of the more tepid palette choices of easy chapter books. Like the good news itself, easy holiday books about Juneteenth have been late in arriving and this will be welcome in most collections.”
—The Bulletin of the Center for Children’s Books

On My Own Holidays

School’s out for the summer! If you’re a school librarian that means you might (finally) have a moment to catch up on cataloging, weeding, or taking time to explore books and releases you might have missed during the busy school year. And with students gone, it’s the perfect time to test View →