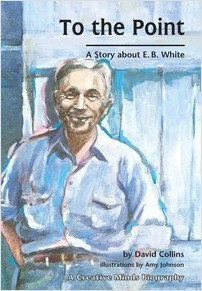 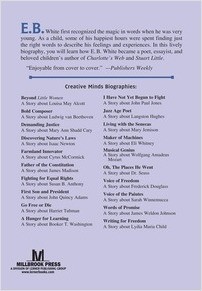 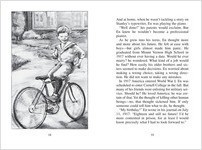 A Story about E. B. White

E. B. White first recognized the magic in words when he was very young. As a child, some of his happiest hours were spent finding just the right words to describe his feelings and experiences. After graduating from college, he took a job with a new magazine called The New Yorker. The magazine’s readers soon began to look forward to the poetry and essays written by E. B. White. His writing was clear and lively with no wasted words, and it could make people laugh as easily as it could make them cry. In 1936, White and his family moved to a little farm near the coast of Maine, complete with sheep, chickens, and pigs. It was there that E. B. White wrote Charlotte’s Web, perhaps one of the most beloved children’s books ever written.

“. . .well suited for children writing reports on their favorite authors.”
—The Bulletin of the Center for Children’s Books