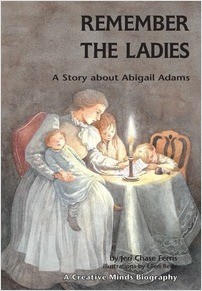 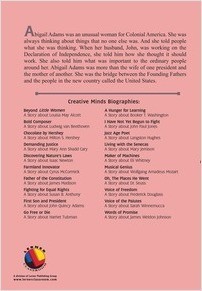 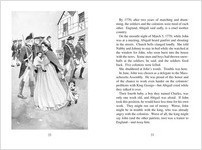 A Story about Abigail Adams

Abigail Adams lived through the Revolutionary War and became the First Lady of the second president of the United States. Though women of her time could not vote, govern, or own property, Abigail believed that women should not be ruled by laws they did not make. Although she did not see these rights come to women, she never gave up talking, writing, and perhaps most important, believing that women were equal to men. Her courage and strength enabled her to help her husband create a new country. She never fired a gun, but her pen was a weapon that helped win freedom for her country—and herself.

“Both books [Remember the Ladies and Writing for Freedom] draw on primary sources and support the view that these two women influenced history through their writings and beliefs. These titles should interest students not yet ready to handle more in-depth treatments.”
—School Library Journal

“The author of this excellent biography succeeds in presenting Abigail in a sympathetic way, helping her readers see how much Abigail did in her lifetime.”
—Through the Looking Glass Children’s Book Review