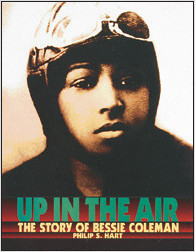 Up in the Air

The Story of Bessie Coleman

When she was growing up in Waxahachie, Texas, in the early 1900s, young Bessie Coleman had to do without a lot of things. Because she was black, she went to inferior schools. Because her mother worked to support the family, Bessie often had to stay at home to watch her younger sisters. But Bessie Coleman always knew she would make something of her life. In 1920 she became the first African-American woman to fly an airplane. Struggling against prejudice and lack of funds, Coleman built a career as a barn-storming pilot in the 1920s. Although she did not live to realize her dream of opening a school for black aviators, she was—by her example—a source of inspiration to generations of flyers, dreamers, and achievers to come.