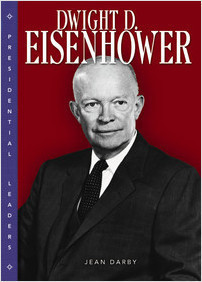 From the Series Presidential Leaders

Dwight D. Eisenhower spent almost his entire lifetime serving his country. After attending West Point, he began a celebrated military career highlighted by becoming supreme commander of the European Allied forces during World War II, and a five star general. Following the war, his popularity soared. He commanded NATO forces before being easily elected as America’s 34th president. During his eight-year presidency, Eisenhower became the first American president to send U.S. troops into Vietnam as advisers, began the space race, and dealt with ever-increasing civil rights issues. Through it all, Eisenhower’s reputation for being patriotic and trustworthy ensured that he would be remembered as one of history’s most popular leaders.