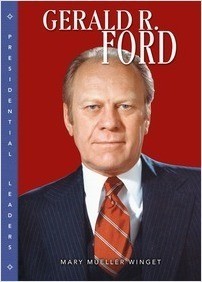 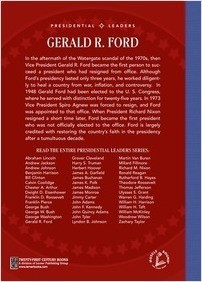 From the Series Presidential Leaders

In the aftermath of the Watergate scandal, then Vice President Gerald Ford became the first person to succeed a president who had resigned from office. Although Fords presidency lasted only three years, he worked diligently to heal a country from war, inflation, and controversy. Ford began a career serving his country in World War II, eventually becoming a lieutenant commander in the Navy. In 1948 he was elected to the United States Congress, where he served with distinction for the next 25 years. During the Watergate investigations in 1973, the vice president resigned and Ford stepped into that office. When President Richard Nixon resigned a short time later, Ford became the first president that was not officially elected by the country. Ford is largely credited with restoring the countrys faith in office after a tumultuous decade.