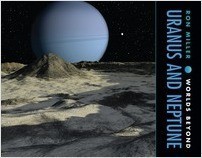 From the Series Worlds Beyond

Two of the most mysterious planets in our solar system are the cold, beautiful blue worlds of Uranus and Neptune. They lie so far from the Sun that they appear only as small dots in even the largest telescopes. Unknown to ancient astronomers, one was discovered by accident and the other as the result of an interplanetary detective story, and an intense international competition. Modern spacecraft have revealed them to be among the most fascinating of all the planets, from the frigid blue hurricanes that rage through Neptune’s atmosphere to some of the most unusual moons in the solar system.

“. . . Miller points out many intriguing features. . . Sidebars offer historical anecdotes, fact summaries, and even a few simple science experiments. . . the art imparts a captivating sense of ‘being there’ that elevates these offerings above the standard run of space titles.”
—School Library Journal