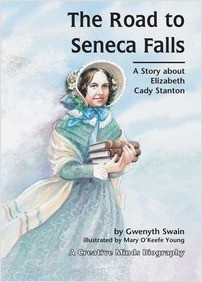 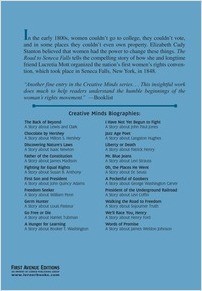 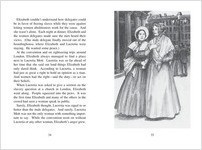 The Road to Seneca Falls

A Story about Elizabeth Cady Stanton

When Elizabeth Cady Stanton was a little girl in the early 1800s, she realized that most people seemed to think that boys were better than girls. As Stanton grew up, she saw that women had fewer opportunities than men. With this in mind, Elizabeth Cady Stanton and her longtime friend Lucretia Mott organized the nation’s first women’s rights convention, which took place in Seneca Falls, New York, in 1848.

“Another fine entry in the Creative Minds series. . . This insightful work does much to help readers understand the humble beginnings of the woman’s rights movement.”
—Booklist

“. . .a book that is enjoyable as well as informative. Black-and-white charcoal-and-pencil drawings provide a sense of the period.”
—School Library Journal

“. . .a useful introduction to this strong female role model.”
—The Horn Book Guide