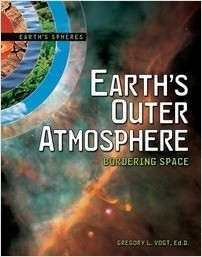 From the Series Earth's Spheres

Earths outer atmosphere is the transition zone between the planet and outer space. This sphere begins at the upper levels of the atmosphere and stretches out thousands of miles from Earth. While it appears empty, this sphere actually contains small amounts of gas, but the atoms of gas are so widely spaced that no life can exist. As the place where Earth first interacts with the Suns energy, the outer atmosphere is crisscrossed by radiation and intense magnetic fields. You might think only astronauts are concerned about the outer atmosphere, but it plays an important role in protecting and sustaining life on Earth.

Gregory L. Vogt is a senior project manager with the center for educational outreach at the Baylor College of Medicine in Houston. His duties focus on space biomedicine, teacher training, and work with graduate students and postdoctoral fellows. Vogt began his career as an eighth grade science teacher and later joined the NASA Aerospace Education Services Program. He established the Teaching from Space office at the NASA Johnson Space Center. He is a former science museum director. Vogt is an educational consultant and the author of many curriculum guides and more than 90 juvenile and adult science books.