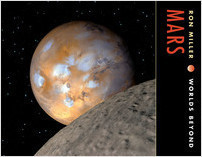 From the Series Worlds Beyond

Known as the red planet, Mars is the closest planet to the sun. Easily seen from Earth, Mars has intrigued thousands of people throughout history. Many have wondered whether the planet could be inhabited by forms of life; many have dreamed of exploring the planet. Several successful space projects have revealed interesting facts about the history, make-up, and geology of Mars. Although much has been discovered, mysteries surrounding Mars and its moons remain.

“Like their predecessors, these entries in this valuable series combine clear, extended expositions with a vivid mix of colorful space photos, well-designed diagrams, and dramatic paintings of alien shores and skies. . . Solid additions for serious students of ‘worlds beyond.’”
—School Library Journal

“Illustrated with photos from NASA, archival drawings, and paintings by the author, this series of books makes fascinating reading for those interested in astromony”
—The Horn Book Guide

“These exceptional books on astronomy take the reader far beyond the simpler intermediate series that are popular with younger readers. . . chock full of stunning photographs and illustrations. . . written clearly and concisely. . . a valuable resource for students who need information for reports or who may be budding astronomy enthusiasts.”
—VOYA