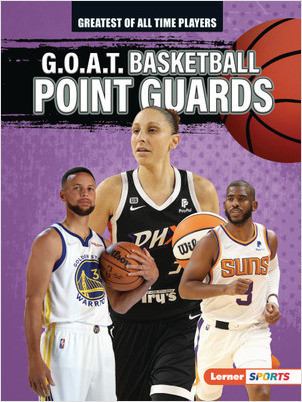 “The illustrated “Greatest of All Time” series offers readers with an interest in professional sports an opportunity to learn more about some of the finest athletes of all time. Each title in the series focuses on a particular position and then offers readers mini-biographies of the top ten players to fulfill that role during their careers. In this way, young sports fans can learn about the top ten football, baseball, soccer or basketball players who played a specific position on their team. Each book is filled with statistics, profiles, and biographical information about some of the finest professional athletes ever to play their chosen sports. In this selection, basketball point guards are the focus. At all levels of basketball, the point guard serves as the quarterback of the team. Point guards distribute the ball, set up the team’s offense, and often drive to the basket or take long range shots. In professional basketball, some of the game’s greatest players are point guards. Steph Curry of the National Basketball League (NBA) Golden State Warriors has revolutionized the style of play for those in this position and made three-point shots a critical part of play. Oscar Robertson was one of the greatest point guards ever to play, and his combination of height and skill helped him to lead the Milwaukee Bucks to an NBA title in 1971. Sue Bird of the Women’s National Basketball Association (WNBA) won five Gold Medals and four league titles during her storied career as a star point guard. Steve Nash of the Utah Jazz combined outstanding play-making skills and a wonderful jump shot to craft a brilliant NBA career. Yet, despite these and several other great professional basketball point guards, it is Dianna Taurasi the WNBA’s all-time leading scorer and a five-time Olympic Gold Medal winner who tops this list. Author Lowe also includes an honorable mention list of ten additional great point guards as well as suggestions for resources for further study of this topic. This combination will appeal to readers with an interest in basketball and sports in general. Reviewer Rating: 4" —Children’s Literature