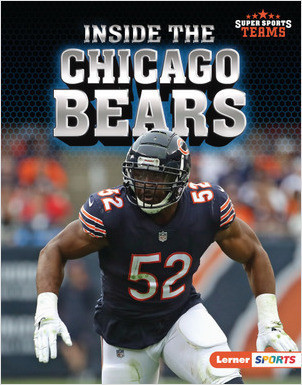 “The illustrated “Super Sports Teams” series is designed to give young readers an introduction to professional baseball and football teams that have captured the hearts of fans. Each book in the series spotlights critical games, coaches, and star players who have helped shape the history of the featured team. This addition to the series focuses on the Chicago Bears. The story of Chicago’s professional football team is laced with tradition and hard-nosed competition. Originally founded in Decatur, Illinois in 1919, the team moved to Chicago a year later and adopted its present name in 1922. There, under the leadership of team owner and head coach George Halas, the Bears became a force to be reckoned with in the fledgling National Football League (NFL). Under George Halas’ leadership, the Bears became known as the “Monsters of the Midway.” In the 1940s and early 1950s, the Bears were a sometimes-dominant team that utilized innovative strategies as it developed a roster filled with talented players. Over the years, players including Sid Luckman, Walter Payton, Gayle Sayers, Dick Butkus, Red Grange, and Devin Hester all achieved great things while playing in a Bears uniform. Such talented players helped the Bears to win a number of NFL titles and one Super Bowl. The 1985 Bears, featuring an explosive offense, the passionate leadership of head coach Mike Ditka, and one of the greatest defenses in NFL history handily defeated the New England Patriots in the Super Bowl. The Bears also made it to the Super Bowl at the conclusion of the 2006 season, only to lose to the Indianapolis Colts. This slim book is the story of the Chicago Bears, some of the franchise’s all-time great players, and bits of the team’s history. Readers interested in professional sports, and NFL football in particular, will find this book to be engaging as well as informative. Reviewer Rating: 4" –Children’s Literature