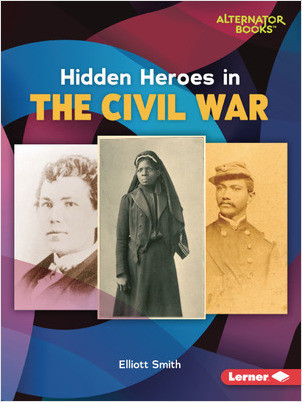 “Joseph De Castro was a flag bearer in the 19th Massachusetts Infantry on the final day of the Battle of Gettysburg, July 3, 1863. As the final Confederate assault led by General Pickett was rebuffed, De Castro was able to seize the flag of a Virginia unit that had reached the Union lines. For this feat of courage, young De Castro became the first Hispanic soldier to be awarded the Congressional Medal of Honor. In a similar vein, twenty-three-year-old Robert Smalls undertook a daring deed on May 12, 1862. Smalls, a capable mariner, took control of a Confederate steamer, sailed it up the South Carolina coast, picked up seventeen passengers who were a combination of his family members and those of his African American crewmates, and made his way through the Confederate fleet and into Union hands near Fort Sumter. The accomplishments of these often-overlooked men and women is the primary theme of this Civil War book. In a series of anecdotal chapters, readers will encounter individuals who carried out bravehearted deeds and did so in surprising ways. For example, very few readers or their adult caregivers, will be familiar with the story of Alexander Augusta as spotlighted in this book. Augusta was an African American man who wanted to be a doctor. Unable to secure admission to a medical school in the United States, Augusta enrolled at Trinity College in Canada. After attaining his medical degree, Augusta returned to the U.S. and wrote to Abraham Lincoln, offering his services to the Union cause. Lincoln accepted him, and Augusta became the first African American surgeon in the U.S. Army. Although he faced severe prejudice during his service, Alexander Augusta attained the rank of lieutenant colonel, taught at Howard University, and continued his medical practice. Together, these stories enlighten readers about the diverse set of people who struggled during the Civil War to determine America’s future course. As the author of this book shows, people from diverse backgrounds had a significant impact on the outcome of the war and the way it continues to shape U.S. history. This book is innovative and will be a good addition to any library’s Civil War collection. Reviewer Rating: 4”–Children’s Literature