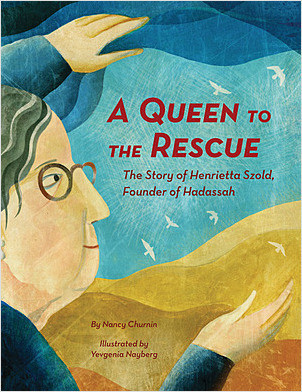 A Queen to the Rescue: The Story of Henrietta Szold, Founder of Hadassah (by Nancy Churnin with illustrations by Yevgenia Nayberg) begins with Henrietta Szold’s birth in Baltimore in 1860. The book covers Szold’s achievements even before and beyond the Hadassah era (who knew that Szold was the Jewish Publication Society’s first editor?) and concludes with her later years in British Mandatory Palestine. (Note: The territory is referred to as “Palestine” throughout the story, with acknowledgments that “British leaders ran Palestine” during the Nazi era; a timeline at the back of the book also notes that Szold made “her first trip to what was then called Palestine, part of the Ottoman Empire” in 1909. An author’s note more explicitly frames Szold’s lasting significance in and to the State of Israel.) In keeping with the title’s “rescue” focus, the book highlights the Youth Aliyah endeavor through which Szold and Hadassah saved 11,000 children from the Nazis.