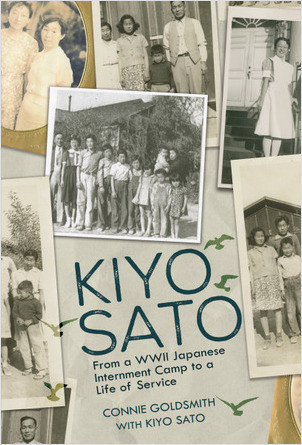 “Kiyo Sato’s story opens on her last night of freedom in February 1942. Ever since the Japanese Air Force bombed Pearl Harbor on December 8, 1941, Kiyo has felt shunned by her fellow college students. Now, against the urging of his wife Eleanor, President Roosevelt has ordered that all people with one-sixteenth or more of Japanese heritage must leave the West Coast, specifically the states of California, Oregon, and Washington. They must abandon their home, work, and daily life; they are only allowed to take one suitcase of belongings each.

As Kiyo helps her seven younger brothers and sisters pack, her mother anxiously prepares food for the journey to nowhere and cleans the house for their return. Little do they know that they will not return for years, that their father will have to sell some of his land at low prices, and that his prized tractor will disappear during the war years. Nor do they expect that their house will be occupied by a single mother and her children when they return home in 1945, after three years of incarceration.

Author Connie Goldsmith, a writing colleague of Kiyo Sato’s, traces the arc of her life as a young student and Nisei (American son or daughter born to Japanese immigrant) at the beginning of WWII through her life in internment camps in California and Arizona to her role as a prominent speaker on the history of the American internment of United States citizens of Japanese heritage and the loss of their property and rights during and after the war. Throughout the book, Goldsmith emphasizes the strong values shared by Kiyo and her siblings, six of whom served in the U.S. military. Kiyo served as a nurse in the Korean War and then found work as a school nurse. With their parents, the children cleaned up their neglected farm and house and returned to the farming business their family had started. However, even as a student in college, Kiyo discovered that telling her story was a way to share aspects of American history unknown to many Americans. Restoring that hidden history became her avocation. This book continues her work, by bringing her story to a wider audience of young teens. Recommended for school and public libraries, as well as classes in American history and leadership.”—Children’s Literature Comprehensive Database (CLCD)