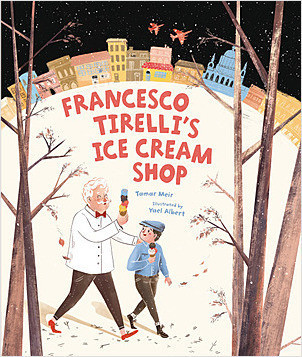 “An ice cream shop becomes a WWII safe haven in this family story turned picture book. In Italy, Francesco Tirelli (Meir’s father-in-law) stops at his uncle’s ice cream cart every day, even when his mother tells him ‘Enough!’ And he remains devoted to gelateria, eventually opening a successful ice cream shop in Budapest, where he meets a Jewish boy named Peter who shares his affection for the treat. After Nazi forces invade Hungary, Tirelli offers his seasonally closed store as a hiding place for Peter’s family and others, who gather together in the back room, light Hanukkah candles, and pray for the war’s end. Though the picture book format seems young for readers within the intended age range, Albert’s mood-shifting illustrations and the moving anecdote offer an accessible take on a terrible chapter of history.”—Publishers Weekly