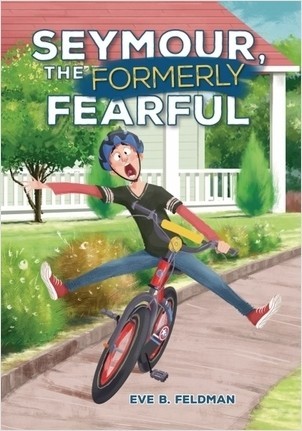 “In many novels the main character overcomes great obstacles to achieve what he or she wants in the world. But Seymour doesn’t want to do anything. Seymour avoids the subway, swimming, going outside, and—most of all—learning to ride a bike. He’s afraid of so many things that the book becomes a sort of anti-story in which the main obstacle is Seymour. His Israeli cousin Pesach, by contrast, is outgoing and gregarious, and on his visit to Seymour’s family he instantly wants to see Grand Central Station and to help people he’s just met repair their bicycle. Readers might expect Seymour to rise to the challenge and maybe even talk to his neighbor ‘the beautiful, perfect Lari,’ and occasionally he does, but he’s a master at finding a beautiful, perfect excuse not to, like the appearance of the ‘biggest, hairiest’ dog he’s ever seen, which triggers a sneezing fit. This might be entertaining if the excuses were funny, but Seymour’s best joke is a fantasy that Lari has parents named Shari and Harry. (She does have a sister named Bari.) Both are extremely blonde and blue-eyed. The races of the characters aren’t always identified, but many, like Seymour and his family, are Jewish, and the text does frequently note the diversity of New York crowds. When Seymour finally overcomes his fear, in the closing chapters, it’s very satisfying, but it’s an awfully long wait. Singh’s spot art decorates the text. Seymour’s tale is mainly for people who are really sick of more conventional hero’s-journey narratives.”