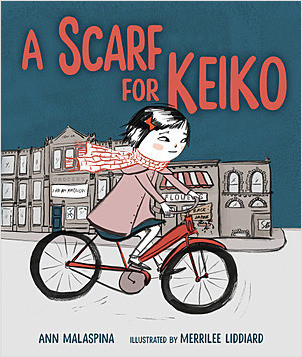 “An act of kindness during World War II still resonates today as a boy reaches out to a girl whom the government does not consider a suitable or loyal American citizen. The United States has entered World War II and Sam’s class in Los Angeles is knitting socks for soldiers. Unfortunately, Sam cannot get his knitting needles to work properly as he tries to knit for his older brother, who is fighting overseas. Frustrated, he rejects an offer of help from his neighbor and classmate, Keiko, a girl of Japanese descent. Keiko is taunted and her father’s flower store is vandalized, and then the family is sent to an internment camp. Sam and his parents are sympathetic—as Jews they understand persecution—and his mother offers to keep safe Keiko’s mother’s treasured tea service. When Keiko leaves her bike with Sam, she includes knitted socks for Sam’s brother. It is then—finally—that Sam comes up with a most neighborly gesture: He will knit a scarf for Keiko because desert nights can be cold. Carefully, stitch by stitch, he finishes his project. The illustrations, in browns, greys, and reds, focus on the faces of the characters and express their frustrations, fears, and concerns. The author’s note briefly explains both President Roosevelt’s 1942 Executive Order and the 1988 Civil Liberties Act. A gentle and accessible story of tolerance during a war overflowing with racial and ethnic intolerance.―Kirkus Reviews