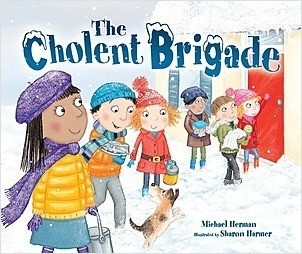 “When heavy snow falls, thoughtful Monty Nudelman get shovelling and clears his neighbours’ paths. But just as he finishes, his back gives way. He has to miss Saturday-morning synagogue — but all the people he has helped want to show him some kindness in return and all have the same idea — to bring him a container of cholent. Not only is Michael Herman’s The Cholent Brigade (Kar Ben, $5.99) a heartwarming story about one good deed deserving another, it also portrays, through Sharon Harmer’s illustrations, a diverse Jewish population. Age three to seven.” – The Jewish Chronicle