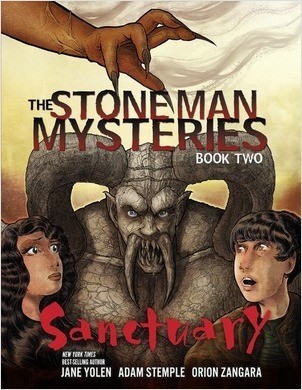 Gr 5-8–Craig McGowan continues his work investigating crimes in Edinburgh at the behest of Silex, a gargoyle watching over the city from the cathedral roof. Craig looks into strange disappearances and a resurgence in crimes that haven’t been committed in nearly 100 years and is drawn to a girl demanding sanctuary of the church’s new priest, chased by a mysterious cloaked figure and spectral hounds. Evolving from the first volume, the artwork presents the narrative primarily from Craig’s perspective, using framing devices to indicate storytelling and information from other sources. An addition of ink wash gives the visuals depth and atmosphere and provides a better presentation of gloom, weather, and the city than the stark linework of the previous tale. However, the action sequences remain muddled, lacking clear transitions between frames and scenes and failing to establish dynamism when it is required. The novel fails to reveal further depths or details about the characters beyond the purposes of plot. A final expository spread papers over plot points and promises a third tale in a manner designed to be ominous, but which leadenly violates the fair play aspect of readers being able to potentially solve the mystery. VERDICT The gothic atmosphere will entice some, and any previous readers of the series will appreciate the artistic growth of the illustrator, but the weak execution of the storytelling won’t create many loyalists.–-Benjamin Russell, Belmont High School, NH