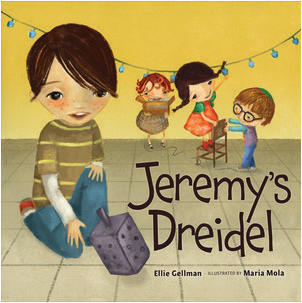 “When Jeremy joins in a dreidel-making workshop at the Jewish Community Center, he uses clay to make a Braille dreidel for his blind father. He tells the curious onlookers about visual impairment, and his friends prove that they’ve taken the lesson to heart when they plan an inclusive Hanukkah celebration. The story is mildly didactic without being preachy, and the information on offer is genuinely interesting. Jeremy’s warm relationship with his father and the supportive attitudes of his friends are heartwarming. Originally published in 1992, this revised and re-illustrated version is much better suited to today’s readers. The original text was unnecessarily wordy and the realistic illustrations were somber. The 2012 version offers a tightened-up text, updated information about adaptive technologies, and colorful, more whimsical illustrations. The new portrayal of Jeremy has no kippah (unlike the original), though one of his friends wears one in every scene. Old and new versions include instructions for making several kinds of dreidels mentioned in the story. Both include visuals for the Hebrew Braille for nun, gimel, hey, and shin. Neither version offers a clear visual of the written Hebrew letters, which would have been very useful in the section on dreidel-making. Jewish classrooms, libraries, and families will welcome this update to an old favorite. The storyline and back matter easily lend themselves to extension activities related to dreidel-making or adaptive technology.”—AJL Newsletter