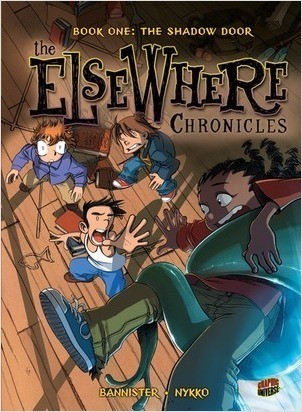 “Fantasy, play, and reality are well mixed in these short books. The reader tries to escape the next attack from the Shadow Spies right along with the foursome as each page unfolds another heart-stopping discovery. The pictures are rich, with well-defined colors and expressions that accurately reflect the character’s state of mind. A brief summary of the previous book is captured at the beginning of books two and three, and a hint of the next episode is given, including the third book, which finishes with ‘The End?’ Developmentally appropriate, the camaraderie between the characters emulates real life boredom, inquisitiveness, adventure seeking, and imaginations sometimes out of control. The ElseWhere Chronicles are a solid exploration for younger teens for whom things may still go bump in the night.” —VOYA