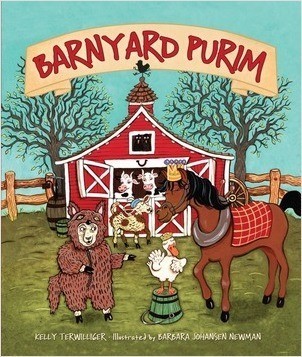 “Purim is a time for pretending—a time for little girls to dress up as courageous queens and for little boys to sprout fake beards and masquerade as Mordecai or Haman. Not wanting to miss out on the fun, Farmer Max’s livestock decide to stage their own Purim play. Chicken channels Cecile B. DeMille and takes charge as the play’s director, assigning roles to her four-footed or feathered thespians and coaching her amateurish players as to their lines and to the storyline itself. The cast includes Duck as Queen Esther, Goat as Mordecai, Horse as King Ahashuerus, Sheep as Haman, the Cows as noisemakers, and the Geese as the audience. Timid Sheep has trouble immersing himself into the villain’s role and cries every time the Cows moo when Haman’s name comes up. Goat suggests Sheep put on an old wolf costume so as to get into character and tap into his evil side. Meanwhile, Fox slinks into the barnyard looking for his next meal. Reminiscent of a Shakespearean comedy where identities become confused, everyone thinks Fox is Sheep in disguise. All the animals remain in character, except for Fox, who stays true to his own character. When Fox lunges for Duck, the real acting begins and Terwilliger’s barnyard farce becomes a real-life drama. Newman’s full-bleed spreads of the wide-eyed animals open up like miniature stages before the young readers’ eyes and fully add to the sense of a play unfolding. A charming and light-hearted Purim story from the author of Bubbe Isabella and the Sukkot Cake.”—Association of Jewish Libraries