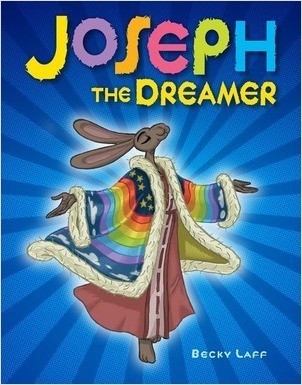 “The Genesis story of Joseph is tailor-made for a graphic novel: it’s full of narrative twists and intense family dynamics, and its hero not only has prophetic powers, but also rises from patriarch’s pet to grand vizier and hero of Egypt. Newcomer Laff casts Joseph’s family as rabbits (the siblings’ clonelike resemblance to one another is especially eerie when they turn against their brother) while the Egyptians are, of course, cats. Anyone looking for psychological nuance or exegeses will be disappointed: Laff takes her source material at face value. Joseph is portrayed as sympathetic from the get-go and emotionally justified in his treatment of his desperate family when they come to Egypt in search of food. However, Laff expertly capitalizes on the take-no-prisoners narrative momentum of biblical tales. She doesn’t shy away from the story’s bleakest moments (in one harrowing sequence, a tearful Joseph curls into a fetal position on a bed of straw in a dark Egyptian prison), and she gives every composition a cinematic sense of character and spectacle.”