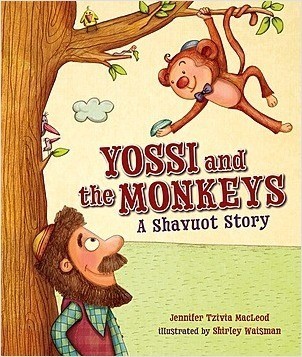 “Hoping to earn some extra money to buy challah, blintzes, and flowers for Shavuot, a man named Yossi sets out with three kippahs, sewn by his wife, which are promptly stolen by a monkey as Yossi naps under a tree. Just when things are starting to resemble a Jewish riff on Esphyr Slobodkina’s classic Caps for Sale, MacLeod turns the monkey into a help, rather than a menace: his playful presence (and juggling talent) make him a perfect sales sidekick, and soon Yossi’s business is booming. The story takes some odd turns from there—it turns out that the monkey, dubbed Zelig, belongs to a traveling circus, requiring some negotiation between Yossi and the circus manager, as well as kippahs for eight other performing monkeys—but Waisman sustains a kooky atmosphere in her brightly colored images of round-headed, red-nosed monkeys and big-eyed villagers.”—Publishers Weekly