National Center for the Study of Children's Literature (Mar 2012) 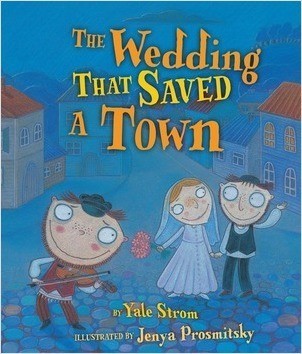 “Yale Strom is an internationally-acclaimed musician and a professor at San Diego State University; he is also a gifted story-teller. His publisher, Kar-Ben, specializes in Jewish-themed children’s books, and the collaboration here of writer, artist, and publisher is ideal.

Strom’s vibrant, culturally-representative tale takes place in old Pinsk, located now in Belarus, but back in the old days it was in the ‘Pale of Settlement,’ the territory Jews were confined to during the reigns of the Czars. (Pinsk is where my own grand-parents came from). In Strom’s story, the little village’s problem is an epidemic of cholera, not an uncommon phenomenon in the swampy, humid land of the Pale. OY! What to do? Cleaning the streets, boiling water, even prayer have not yet helped.

Time for the rabbi to call in the itinerate wedding musician Yiske and explain to him the need for a ‘Black wedding’: the marriage in a cemetery of two orphans whose deceased loved ones will bless the wedding and thus the town. The problem? Only the bride has been found. As the town contributes wedding cake, a wedding gown, and a wedding dinner, the story moves to finding a suitable orphaned groom. The criterion? Goodness of heart. Yes, such a person exists, and, moreover, he already loves the bride.

The wedding happily happens, accompanied by klezmer music (the thrilling music traditional in Jewish Eastern Europe) and hopeful villagers. Guess what else—the leader of the klezmer band gets a telegram shortly afterward letting him know the cholera epidemic has ended. The story closes with a smiling Yiske thinking to himself, ‘… maybe miracles do happen!’

Strom’s prose captures the expressive cadences of the Old World, for example, not just one ‘Oy!’ but three—’Oy! Oy! Oy!’ making for a most enjoyable read-aloud experience.

Promitsky’s art is perfect, comical and warmly expressive of life in a shtetl (small Jewish town) from the cobblestone streets to the water buckets carried on people’s shoulders to the horse-drawn wagons. The art fits the story and adds enjoyable little details to the text, like Yiske’s cat scratching itself and, later in the text, the rabbi himself dancing to the klezmer music at the wedding.

A glossary of Yiddish words is appended, e.g. ‘shtetl’ and ‘klezmer.’

I hope to see more collaborations between Strom and Promitsky published by Kar-Ben. —National Center for the Study of Children’s Literature