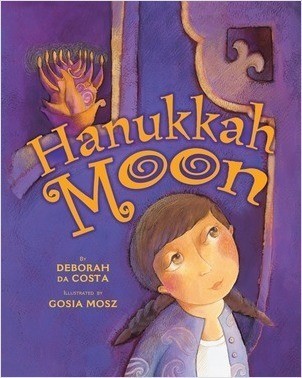 As Da Costa reminds us in an author’s note that precedes the story, Hanukkah "celebrates a time more than 2,000 years ago, when a small group of Jews fought an army of Syria and took back the holy city of Jerusalem. "When the Jews rededicated their temple and lit the sacred lamp known as the menorah, there was very little oil to keep the seven-branch candelabra burning. According to legend, however, the menorah burned brightly for eight days. American Jews are familiar with how this eight-day winter holiday is celebrated: each night one more candle is lit, children play with dreidels (a four-sided spinning top), sing songs, and eat fried potato latkes and chocolates shaped like coins. When little Isobel gets to visit with her Aunt Luisa who has recently moved to the United States from Mexico, she learns that Jews from Latin America also celebrate ’’Januca’’ but with a few differences. For ex-ample, Isobel gets to hit a large piñata shaped like a dreidel that is filled with candy and toys. Instead of latkes, Isobel helps her aunt prepare couscous, a Middle Eastern dish of crushed bulgar wheat. And then there’s the Ha-nukkah moon, which is the “luna nueva” or new moon that always appears during Hanukkah. With each new tra-dition, Isobel’s appreciation for her aunt’s culture grows. This handsomely illustrated book is a welcome addition to the winter holiday season.