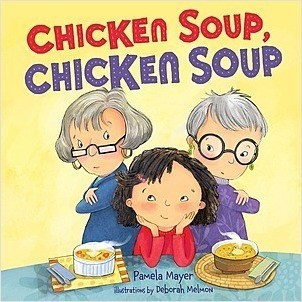 “Lucky is the child who gets to savor two different kinds of chicken soup made by her two grandmothers. Dark-haired Sophie has a Jewish bubbe (Grandma Ellie—her mother’s mom) and a Chinese nai nai (Grandma Nancy—her father’s). The grandmothers are miffed when Sophie calls the dumplings in their soups by the wrong terminology. The girl wonders: ‘How could a little piece of dough, stuffed with meat and floating in a bowl of chicken soup, cause a problem?’ The grandmothers are quick to point out the differences between kreplach and wonton, but Sophie has a plan to show her elders how good a mixture of ‘a little Jewish, a little Chinese—a lot like me’ can be. The grandmothers confess their cookery has become less traditional: Bubbe uses wonton wrappers instead of the usual handmade dough, and Nai Nai buys her chicken at the kosher market, saying it tastes better, but they both acknowledge their love and admiration for their granddaughter. The amusing cartoonish illustrations don’t overplay Sophie’s diverse origins, which are made explicit in the text. Recipes for chicken soup, chicken-liver kreplach, and chicken wontons close out this good-hearted tale. The story may a little obvious, but the good feelings (and good tastes) that it brings to mind are cooked just right for families like Sophie’s—and everyone else—to enjoy.”—Kirkus Reviews