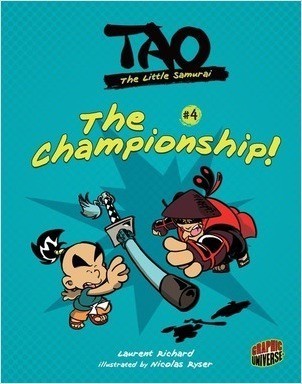 “When two of their schoolmates are kidnapped, Tao and his friends team up to find them. In the fourth installment of this French graphic-novel series, Richard and Ryser set aside their usual short gags for a single book-length mystery: the disappearance of Master Snow’s two best students from the International Martial Arts Championship. With their usual disregard for the rules, Tao and the other younger students decide to investigate, eventually uncovering a link between the missing students and a legendary katana. Though the narrative is longer, the slapstick humor is unchanged from the earlier outings. Tao oversleeps on the day of their departure and forgets to put on his pants in his rush to make the bus; later, he runs into a telephone pole while chasing suspects. The worldbuilding remains generically Asian, though less aggressively so than in the first two volumes. Ryser’s art ably conveys Tao’s energy and enthusiasm and especially shines during the climactic fight between the students and the kidnappers. The simultaneously publishing fifth volume, Wild Animals!, returns to the original episodic structure, though oddly without the tongue-in-cheek chapter headings. It introduces a new female character, Ruby, who adds gender balance to the cast but who also fills the predictable role of Kat’s romantic rival. A ho-hum entry in the increasingly crowded children’s graphic-novel field.” —Kirkus Reviews