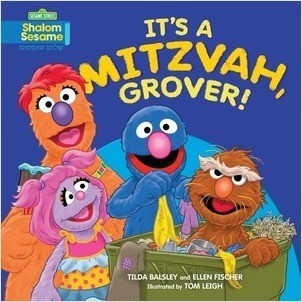 “Can a book do its job too well?

The story is basic enough: Grover and his Israeli friends want to clean up a playground. Moishe Oofnik refuses to help them, because he’s a grouch. (He lives in a trash can like Oscar, his American cousin on Sesame Street.) But Moishe is more than willing to accept the discarded trash from the play area. He even weeds out the items that aren’t garbage. ‘Recycling is a mitzvah!’ Grover says, to Moishe’s chagrin. ‘Moishe, you are doing a mitzvah.’ Oddly, though, the simple plot is interrupted, halfway through the book, for a lesson in color theory. As the Muppets paint the swing and slide, they talk about the colors they’ve chosen. Mahboub has picked yellow, ‘like sunflowers, loquats, lemons, and grapefruit.’ Mahboub goes on to explain that yellow and blue make green. The characters even teach some Hebrew words. Doing a mitzvah is helpfully—if not quite correctly—translated as doing ‘something nice for others.’ It’s hard to fault a book for teaching too many valuable lessons. But after four straight pages, the lecture on colors turns into a distraction. Still, talking about colors is perfectly in character for Muppets. (Grover’s friends come from Shalom Sesame, set in Israel.) And when readers take a look at the seesaw, painted in rainbow colors, they may forgive everything.