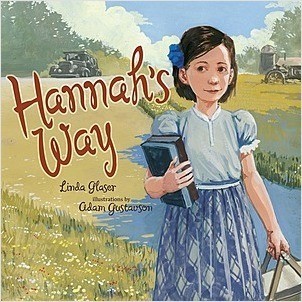 “Sometimes the tiniest actions are the most heroic. In this book—based on a true story—the heroes are children.

Illustrator Gustavson is very good at painting eyes. Even when the characters have their eyelids closed, it’s easy to read their expressions. Mostly they look nervous. Hannah is nervous because she might have to miss her class picnic. Her family won’t drive on the Jewish Sabbath; she’s the only Orthodox girl in a school in rural Minnesota. In every picture, Hannah looks nervous in a slightly different way: shy when she’s a new student, timid and regretful when she tells her father about the picnic. ‘Just because there are no other Jews…’ he says, ‘doesn’t mean we forget the ways of our people.’ Hannah thinks: ‘I don’t want to follow the ways of my people… I just want to go on my class picnic.’ On the second-to-last page, she has to speak up in front of the entire class. Her eyes are pointed at her desk. ‘I—I can go if someone will walk with me,’ she whispers. And in one brief, moving sentence, all the students raise their hands to volunteer. In this picture, their eyes are barely visible—they’re tiny scribbles of paint—but they seem to be filled with joy.

The moment is a little miracle—nearly impossible to believe, but entirely convincing and true.”—Kirkus Reviews