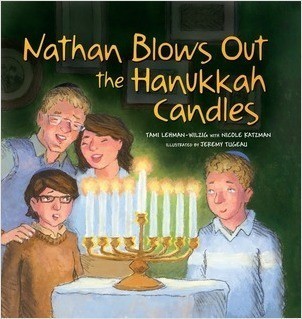 “The traditional family Hanukkah celebration is here adjusted to include an autistic boy’s interpretation.

Jacob’s brother, Nathan, can be quite vexing, especially when he repeats himself constantly. Jacob’s mother has explained that Nathan’s ‘mind is wired differently’ and that he ‘just looks at things in his own way.’ On the first two nights of Hanukkah, Jacob is excited to welcome new neighbors Steven and parents to their candle-lighting ceremony. He quickly regrets it when, to his acute embarrassment, Nathan blows out the candles despite being told they are not like birthday ones. Playing dreidel also proves to be less than enjoyable when Nathan fixates on the spinning and ignores the rest of the game. Yet when confronted by Steven—’your brother is weird’—Jacob counters with the defiant response that Nathan’s autistic (not, as Steven mishears, ‘artistic’) behavior helps his family see the world just a bit differently. Softly outlined illustrations offer snapshot views of family gatherings while also capturing emotional expressions of surprise, chagrin and enjoyment, as reflected in the arc of the story line. A creative final scene encompasses both the traditional menorah lighting as well as a birthdaylike candle celebration atop a tray of jelly doughnuts.

This inclusive holiday story offers a realistic perspective on one family’s ability to embrace an autistic individual with respect and compassion.” —Kirkus Reviews