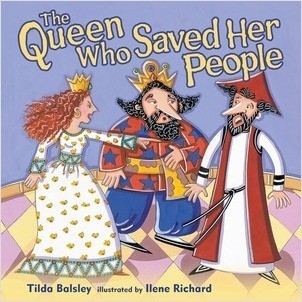 “This book is an imaginative take on the tried and true Purim story. King Ahashuerus is looking for a queen. His loyal followers find Esther, a young and beautiful Jewish girl, who the king selects to be his wife. She lives with her cousin Mordechai, who persuades her to hide her Jewish heritage in order to protect herself.

However, things do not stay peaceful for long. Mordechai offends one of the king’s advisors, Haman, by refusing to bow to him. So Haman decides to punish all the Jews in the kingdom. He tells the king that none of the Jews follow his orders. The king grants Haman permission to kill all Jews, young and old, on the 13th day of Adar.

Mordechai steps into action, convincing his sister that maybe her role in becoming queen was to save the Jews from this awful plight. So she fasts for three days, and convinces all the Jews to do the same.

She invites the king and Haman to join her for dinner. She tells the king about Haman’s awful plot against the Jews, and the king is so mad that he decides Haman should be hung on the gallows.

This fun, rhyming story can be read or performed in a theater script format with five different parts. It is color coded and easy to follow. It is beautifully illustrated with imaginative pictures that will engage children ages four and up.” —Jewish Journal